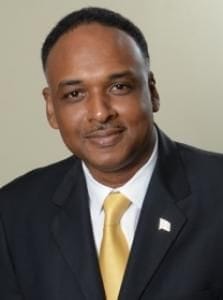 Omar Sweeney is an astute Engineering Professional with a wealth of experience of over two decades in the areas of Civil & Construction Engineering and Project Management, working for several global entities both in the local and international markets. Mr. Sweeney was also recently appointed by the Prime Minister of Jamaica, to the Professional Engineers Registration Board (PERB) where he has been elected by the Board as Chairman, to serve from May 2018 to May 2020. He is also an active Member of the Jamaica Institution of Engineers (JIE), having previously served as President.

Mr. Sweeney currently holds the post of Managing Director at the Jamaica Social Investment Fund (JSIF) which is a lead project management arm for the Government of Jamaica. In his capacity as Managing Director, he has portfolio responsibility for the execution of several impactful social intervention and infrastructural projects within vulnerable communities across Jamaica. Mr. Sweeney had served in senior leadership roles at the Jamaica Public Service (JPS) and the Planning Institute of Jamaica (PIOJ).

Mr. Sweeney also serves as the Deputy Chairman to the Prime Minister of Jamaica for the Zones Of Special Operations (also referred to as ZOSO) in Jamaica. In his capacity as Managing Director for the JSIF and Deputy Chairman for the ZOSO, he has spearheaded several successful social intervention initiatives which have helped to empower communities in the ZOSO areas of Jamaica.

He is the holder of a Bachelor of Science Degree in Civil Engineering and a Master of Engineering Degree from the University of Florida and a recipient of the Martin Luther King Scholarship. He has also successfully completed post graduate executive training programmes at the London School of Economics and at the University of Oxford.