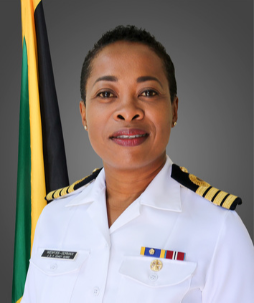 She has served on secondment to the Ministry of Transport and Works where she was appointed the Deputy Director of Marine Transport.  She is a founding member of the Women in Maritime Association of the Caribbean and an active member of the Women's Leadership Initiative group in Jamaica which is a Sub-committee of the United Way.  She has held several appointments at the JDF Coast Guard including Ship Captain, Operations Officer, Diving Officer and Officer Commanding Shore Base. She also served at the JDF Airwing as Second in Command 2009 2012. She was awarded the Medal of Honour for Meritorious Service in 2006 and the Queen's Diamond Jubilee Medal in 2012.

Capt (N) WEMYSS-GORMAN holds a Master of Science degree with distinction in National Security and Strategic Studies from the University of the West Indies.  She presided over the establishment of the Caribbean Military Maritime Training Centre in 2012 and served as the Commandant until November 2013 when she was appointed the Acting Commanding Officer of the JDF Coast Guard.  She is the first female to attain the rank of Captain (N) and command a unit in the Jamaica Defence Force.  In August 2018 she assumed the responsibility to establish a new structure in the Force which will encompass the Coast Guard, Air wing and Cyber Unit.

Capt (N) WEMYSS-GORMAN is a member of CCELD 2015 cohort and is a Justice of the Peace for the parish of Kingston.