President, BC Association of Police Boards

Hon. Mary Collins, PC, grew up in Vancouver and then spent her early career in Toronto and Calgary working in both the public and private sectors. She later returned to BC and was first elected to the House of Commons of Canada in the 1984 federal election as the Progressive Conservative Member of Parliament for Capilano-Howe Sound, British Columbia.

In 1988 Mary was appointed to the Cabinet of Prime Minister Brian Mulroney as Associate Minister of National Defence from 1989 to 1993. She also served as Minister responsible for the Status of Women from 1990 to 1993. In January 1993, she became Minister of Western Economic Diversification and Minister of State for the Environment and finally in June 1993 as Minister of Health and Welfare.

After leaving politics, Mary was President of the BC Health Association and later was the Executive Director of the BC Alliance for Healthy Living,

She has served as an honorary co-chair of the women's campaign school of the Canadian Women Voters Congress, and as a consultant in promoting women's political development in Vietnam and Ukraine. She spent five years in Russia initially working on a health reform project in Chuvashia and then for the World Health Organization in Moscow.

Mary currently lives in Victoria BC where she serves as a member of the Saanich Police Board and is the President of the BC Association of Police Boards. She is also a member of the Pacific Opera Victoria Board and the Boards of Goward House and the Canadian International Council Victoria Chapter. Mary is a former Director of the Emerging Leaders' Dialogues Canada.

She holds honorary doctorate degrees from Royal Roads University and Royal Roads Military College and is a recipient of the Distinguished Alumni Award from Queen's University. She also has received the Queen's Jubilee Award.

Mary has been  involved with the Emerging Leaders' Dialogues since their inception and she participated in the 1980 Duke of Edinburgh's Commonwealth Study Conference which was a precursor to the Dialogues. 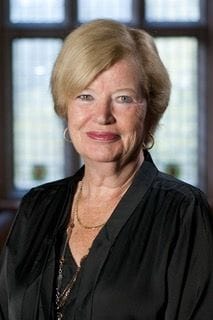