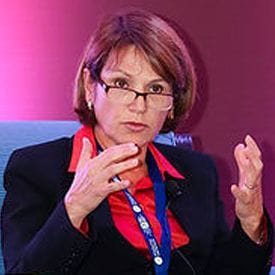 Elissar Sarrouh is a former UN Diplomat, a Professor of Practice at ISID/McGill and founding CEO of Expert Consulting on Governance and an experienced Board Director who serves on a wide range of Canadian and International Boards, Committees, Panels and Networks.
Elissar recently completed a most rewarding and thriving career with the United Nations. She served and represented the United Nations/United Nations Development Program/UN Women in various developed and developing countries, including conflict and stable contexts. She served as Resident and non-Resident Representative of the United Nations Development Program, as well as global and regional organizations such as the OECD/DAC, the World Bank and various global funds, as well as regional and national commissions such as UNESCWA, the UN/Spanish MDGs Fund and the UNDP/OECD Partnership for Democratic Governance (DGP). Elissar represented UNIFEM/UN Women at the EU in Brussels and led the UN Country Team in developing the EU gender policy. She is a highly skillful negotiator with a track record of building consensus around sensitive political reforms and unlocking stagnant processes and decisions.